When learning a new language, first of all, we should have a general understanding of the language, so the first course of each new Chinese training program is to give the students the basic knowledge of Chinese, that is, Chinese Pinyin and Chinese characters. Chinese Pinyin consists of three parts, they are consonants, vowels and tones. However, introduction about Chinese characters is relatively few in the first Chinese course, because few students learn Chinese characters. Besides, the teacher would get a general understanding of the Chinese levels of the students through communication. After that, formal Chinese teaching begins.

The first two classes of the chinese classes for adults are used to teach pronunciation, and a  map is used to show the Chinese Pinyin.

As for the three parts of the Chinese Pinyin, all consonants and a part of the vowels( a, o, e, i, u, ü) will be taught in the first two classes, and the rest will be taught in the future classes to let the students absorb the rest of Pinyin slowly, which helps the students memorize the Chinese Pinyin, otherwise they may feel afraid of learning Chinese facing too many consonants and vowels once. In the past, the teacher would spend a lot of time correcting the students’ pronunciation when teaching Pinyin and found that the effect was not very good. Now the pronunciation teaching costs only one class, and the teacher will correct the students’ pronunciation gradually in the later classes, the effect of which turns out much better than that of the former teaching method. The learning and mastery of the tone are also time-consuming. When learning tones, using gestures while singing vowels can give the students a more intuitive understanding of the pronunciation of the tones. However, in order to let the students pronounce the tones correctly, they need to practice and be corrected continuously. 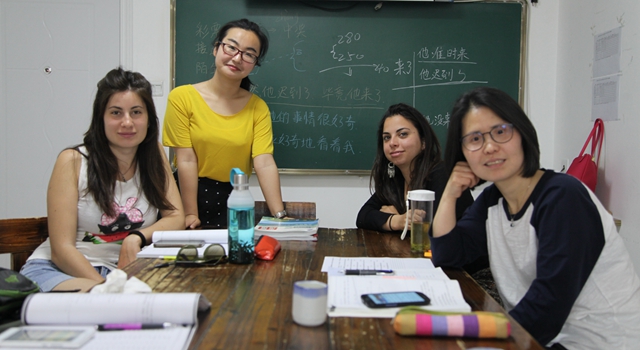 The study of new words is the most time-consuming part of each lesson. After teaching the new words, if the students can basically master these words, then sentences and dialogues will not be a big problem. When learning a new word, you should get a clear understanding of the pronunciation, meaning and usage of the word. And when you encounter some commonly-used words, you are supposed to learn words related to this word. For example, when we talk about fruit, we are supposed to list all the common fruits. In terms of parts of speech, nouns, pronouns and adjectives are relatively easy to learn as they are used in a similar way in English. Emphasis should be placed on adverbs and auxiliary words because a lot of tenses and meaning of expression are related to these words. The students are asked to make sentences with each new word. Through making sentences, the teachers know how much the student master the words and the sentence patterns. In this way, the contents of this lesson can be basically mastered by the students.

When learning new words, the sentence patterns are also basically covered, thus the students have a general understanding of under what conditions should they use these sentence patterns. Through conversations, they can further understand how sentences are used in conversation. After the conversations in the text have been taught, the students will be given a minute to ask questions about the content they can’t understand. Then the students will be divided into groups, imitating the contents of the text, and writing some new dialogues, they are supposed to properly add what they have learned from the previous class in the new dialogue, so as to learn while reviewing.

After such a process, the conversational content of the course can be well understood. In addition, students will be given homework to consolidate the knowledge they have learned after class. For example, giving them four or five important new words from the list of new words and let them make sentences. Above is the complete teaching process of a class, when concerning part of the culture sometimes, the teachers will spread the Chinese culture in class so that the students can know something about Chinese culture.